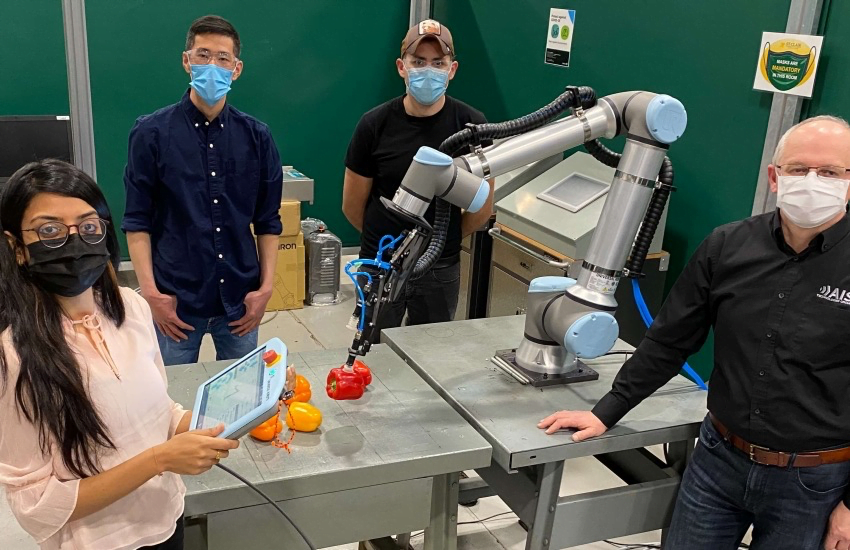 St. Clair College student researchers are developing an automated way to package sweet peppers for the greenhouse industry by connecting a people-friendly robot with a sophisticated vision system.

The tricky part is the robot must put two yellow, two red and two orange peppers in each bag destined for a grocery store shelf.

It’s an assembly line process that currently requires four workers at Under Sun Acres, the Leamington greenhouse for which the College is doing the research. The workers sit at a bench and slide a plastic bag along, each putting in a different colour pepper and the last one sealing the bag.

The goal is to automate the process so it only requires one person, said John Lopez, research program manager for Applied Research and Development at St. Clair. “It’s to gain efficiencies. Some may argue that that’s losing jobs, but really the whole objective is to create jobs in robotics programming, as opposed to manual labour.”

Khushboo Patel, Yu Wang and Ulises Martinez are among the future designers, programmers and builders of automated systems who could fill those jobs. The pepper bagging project is the first real-world challenge for the three Electromechanical Engineering Technician students — Patel and Wang in the robotics program, and Martinez in the industrial program.

Guiding them is Nick Dimitrov, of AIS Technologies Group, a 28-year veteran of the automation industry.

“It’s a unique situation for these students,” he said. “They don’t just learn about robotics. They’re learning about vision systems and artificial intelligence.”

The College is providing the technology: a Universal Robotics UR10 collaborative robot (cobot for short) and a Pickit vision system, both purchased in 2019.

Patel and Wang are doing the programming and working with Martinez to design the added components needed to make the system work. Martinez designed the tooling and then used the College’s Markforged 3D printer to make two spindly arms for the cobot that can be precisely manoeuvred. All three worked on creating the pneumatic system that allows the cobot’s suction-cup hands to gently pick up the peppers.

The Pickit vision system is enclosed in a green box suspended above the yellow, orange and red peppers — each colour to be fed to the cobot on a separate conveyor belt. The cobot hovers over them and picks up two peppers of each colour at a time and turns to deposit them into the bag. Two mechanized metal arms designed by Martinez will hold the bag open and release it when it is full to be sealed by a worker.

The vision system not only sees in three dimensions, but it also has depth perception. Connected to these “eyes” the cobot can pick an object, like a pepper, from a bin or pile on a conveyor belt, Wang said.

The cobot, unlike other industrial robots, can work next to humans using sensors that stop it from banging into them and allowing them to manually manipulate it.

Twice a week since November, Dimitrov and the students have been working on the project in a small room at the College’s Ford Centre for Excellence in Manufacturing. They are aiming to have the system ready to demonstrate to Under Sun Acres greenhouse by May.

“By doing this research I learned a lot about the Universal robot,” Patel said. “So, when I step into the industry it’s a good opportunity for me.”

The project has prepared her to present and sell her skills, she said.

It has fuelled Wang’s passion for robotics and automation, he said. “I just want to get more experience.”

Martinez said he has enjoyed learning more about robotics and automation. “It helped me to improve my design abilities and my teamwork,” he said.

The greenhouse industry is hungry for automation and researchers around the world are working on these kinds of systems, Dimitrov said.

The research is being funded by a $25,000 Engage grant from the Natural Science and Engineering Research Council. The grant pays the full cost of the first research project for a new industry partner.

“I come from industry,” said Lopez, who worked in pharmaceutical manufacturing. “The challenge is you never really have time to conduct research because you’re always busy with the day-to-day operations. This program allows them to have somebody else do that work for them.”